Kingman Harm Reduction is located at 3505 Western Ave Suite B in the Mohave Mental Health building, the entrance is to the left as you face the front doors of MMH.

The Naloxone kits provided at Kingman Harm Reduction have two vials of 0.4 mg Naloxone, two syringes with needles attached. These kits are great and anyone who takes prescription opioid pain medications or who abuse ovoid street drugs should have several of these kits around and always carry them with you.

I have Naloxone at home and carry a kit in the car. I was concerned having a kit rattling around in the glove compartment the vials could break or the bag become torn.

So I made a rugged Naloxone kit I could throw in the glove compartment, a ladies purse, a backpack, or anything without worrying too much about it getting broken.

Rugged Naloxone Kit
The Kingman Harm Reduction kit comes with syringes with needles attached. You'll need to replace these and I explain as we go.

You need to go to your local pharmacy and talk to the pharmacist, get to know them. Explain what you're doing and ask for one of their large prescription bottles, and a couple syringes with separate needles.

I found that two 3cc syringes and two needles fit in the prescription bottle that's 3.75" without the lid. This makes a small rugged Naloxone kit you can carry about anywhere. 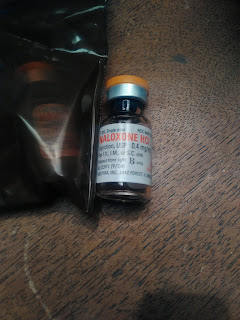 Syringes and syringes from pharmacy for Naloxone Kit 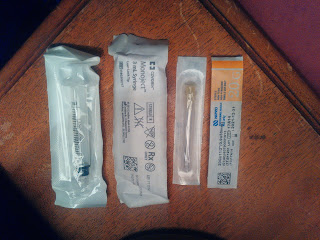 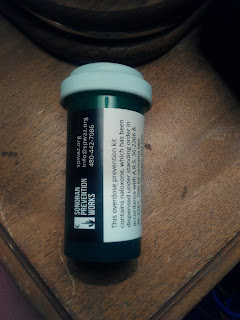 WARNING
Naloxone has a SHORT Half-Life The time it's effects last.....
When naloxone is given intravenously, it starts working within two minutes, and when it’s injected into a muscle, it works within five minutes. When Narcan nasal spray is used, it also works within two to five minutes.

The effects of Narcan last anywhere from half an hour to an hour. For some people, multiple doses are required, because the length of action of opioids is longer than naloxone’s duration of action.

What is the Naloxone AKA Narcan half-life? Narcan is metabolized in the liver, and studies have shown the half-life in adults to be anywhere from 30 to 81 minutes.

In infants, the half-life is around 3.1 hours. Again, Narcan and any form of naloxone doesn’t have any effect if there are no opioids present in a person’s body. It doesn’t have the potential for abuse, and all that it does is reverse the effects of opioids including respiratory depression so that the person who has overdosed can resume normal breathing. LINK TO PAGE

Unlike the rumors some physicians are spreading people are NOT abusing naloxone!

In 12 years working undercover narcotics I have never seen a drug addict spend half the day finding money, the other half looking for heroin, so they can shoot up and get high only to inject themselves with Naloxone....

In my experience as an EMT I've seen many pissed off drug addicts when given Naloxone by EMS because they ruined their high. The fact they were about to die doesn't seem to hit them until later....

Jay Fleming
In my younger days I was a volunteer firefighter for Morgan Acres, and a Captain on the Spokane Civil Defense Fire Department. We supported Spokane Fire on 2nd and 3rd alarm fires. I spent several years in Explorer Search and Rescue, before going into law enforcement. where I worked three years in uniform, including two years as a deputy coroner, and brand inspector.. I also worked undercover narcotics for 12 years. Today I think our nations war on drugs is a failure. So I became a speaker for LEAP, Law Enforcement Action Partnership. I got my ham radio license in 1980, along with an interest in emergency communications. I spent a year working on an ALS ambulance, and a year doing psych transports for the ambulance company. I was trained as a Mobile Intensive Care Unit Paramedic at Daniel Freeman hospital in Inglewood California during the 1984 Olympics After moving to Arizona I spent 5 years as a volunteer for the Bullhead City Crisis Intervention Team and the Arizona State crisis team. Today I live with my wife in a small town of Dolan Springs Arizona.